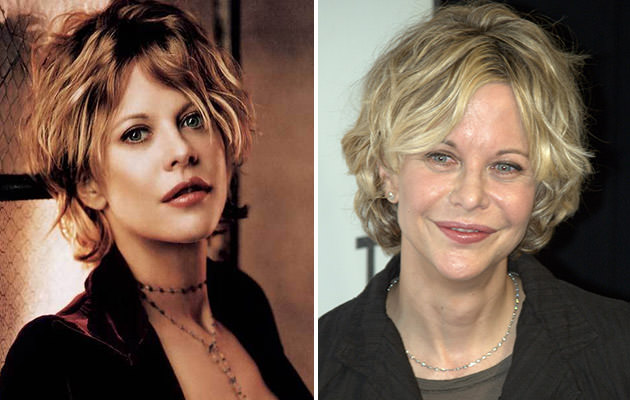 Hollywood is all about glitz, glamour, and beautiful people. There are some popular stars without classic good looks, but they’re almost invariably cast in sidekick roles and comedic parts. It’s rare to see an average looking romantic hero, much less one who’s downright unattractive. Those with great looks rule the celebrity world, but not all of them retain their thrones throughout their lives. Some of the best looking celebs go from being poster-worthy to just plain scary after a couple of decades. Here are 15 of the worst.

Truly America’s Sweetheart for the ’90s, Meg Ryan romped all over the romantic comedy scene for over a decade. Her signature golden locks, sweet smile, and shy looks made her the ultimate girl next door, the perfect girlfriend, the nice girl who deserves to get the guy in the end. And she usually did. From Sleepless in Seattle to When Harry Met Sally, Meg was the cute woman men wanted to bring home and introduce to their parents.

But Meg, like so many Hollywood actresses, fell into that black hole of “getting a little work done.” Her collagen-blown lips changed shape from month to month for a while, and the plastic surgery she’s had done has changed her face completely. No longer fresh faced and beautiful, now she looks hard, tacky, and lower-class. When thin becomes scrawny and your skin is stretched so tight it’s shiny, you’re trying too hard, girlfriend.